Home Let there be flight!

Let there be flight! 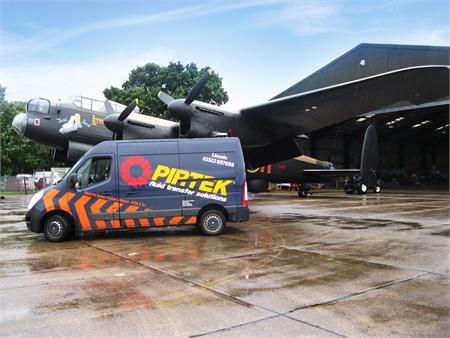 Nothing compares to the sound of a Rolls Royce Merlin in full roar.

Among the second world war aircraft powered by this engineering classic, was the Avro Lancaster heavy bomber. Thousands of these war machines were built, many of which were based on the flatlands of eastern England, setting forth on bombing raids over Europe. More than half were lost during the war and only 17 aircraft survive today. Of these only two remain airworthy, one in Canada and one in the UK.

Pirtek is playing its part in changing this. A number of these venerable bombers are under restoration to airworthiness, including NX611, a Lancaster Mk. VII at Lincolnshire Aviation Heritage Centre, owned and run by the Panton family. In the Pipeline was taken around by Andrew Panton, a third-generation participant in the museum.

NX611 was named Just Jane upon the beginning of her restoration in 1992 and among her other claims to fame, she has appeared in Doctor Who. The aircraft looks stunning on the outside and is well on the way to being airworthy, but it’s been a long journey.

As the Lancasters went out of service in the ’50s and ’60s, the number flying plummeted, as what was then recent history did not provoke the interest it does today. The ’60s were a time of looking forward to the “white heat of the technological revolution”, not to mention Swinging London, Woodstock and the rest. By the latter half of the decade there was only one Lancaster flying in the world.

The plane later to be renamed Just Jane went up for auction in 1972 and brothers Fred and Harold Panton were keen to buy a second world war bomber to honour the memory of their brother Christopher, who had been lost in the Nuremberg raid in 1944. The aircraft was eventually sold to another buyer, however, but when she came up for sale again in 1983, they were able to complete the purchase.

A condition of sale was that she would complete a previously agreed total of 10 years’ gate-guardianship at RAF Scampton and when this period was up, she was brought to East Kirby in 1987. She hadn’t flown for 23 years and restoration began in earnest in 1993. The rest is history.

“She’s in good condition really, she just lacks that final 10 per cent to make her airworthy,” says Andrew. It’s been a detailed job, he explains. “You have to go through the whole aircraft with a fine toothcomb. A lot of rivets need replacing because they’re the original type, rather than the ones we use today. So in theory she had to come apart and go back together again.”

It wouldn’t be a great idea to fly her right now, but she’s almost there. “She has got no ailerons at the moment,” Andrew says, “because they’re off for overhaul. Once they’re back on, technically she could fly.”

The aircraft has the four original Merlins and the museum has one more working engine in reserve, with a further five not airworthy at this time. Fuel and oil lines to the engines are a large part of Pirtek’s contribution to the aircraft.

“There’s a lot of different sorts of pipes on the aircraft,” says Andrew. “All rubber pipes that come from the fuel tanks to the fuel cocks, fuel cocks to the engines, oil tanks to engines and then from the hydraulic collector tank through to the hydraulic services like the flaps and the undercarriage. Pirtek produces new pipes for us as and when we take them off. The materials are different from the originals, but the principle’s the same, so they’re a very high Pirtek standard.”

The museum has a De Havilland Mosquito fighter-bomber, also in taxiing condition. The Mosquito was a mostly wooden construction (known as the Wooden Wonder), multi-role aircraft that undertook photo-reconnaissance activities as well as being a night fighter and light bomber. The plane is privately owned but Lincolnshire Aviation Heritage Centre does the engineering for the owner. This means Pirtek supplies the hoses for the Wooden Wonder as well.

“The Mosquito has Merlin 25s,” says Andrew, “whereas the Lancaster has Merlin 24s. They’re basically the same engine, it’s just the coolant flows the opposite way.”

Additionally, the museum has a Percival Proctor and a Handley Page Hampden, from the same era, and several wartime vehicles including a Ford WOT1 fire tender.

Of the more graphic exhibits in the museum are a number of twisted propellers, engine parts and other relics of crashed aircraft. Andrew explains, “These are all parts recovered from crashes in Lincolnshire. We’ve got various different engines and other aircraft parts. The damage to these heavy-duty parts really demonstrates the forces involved with the crash, how easily it bends propellers and smashes engines.”

With an eye to the future, Andrew describes the requirements for flying the Lancaster. “The aircraft has two wheels under the wings and the third at the tail, making its on-ground handling quite different from most modern large aircraft, which have the third wheel at the nose. It’s all about steering the plane using asymmetric power. The angle of approach is also different for tailwheel aircraft. There are quite a few variances. Once you’re flying, it’s no different, but take-off, landing and taxiing are very different.

“The Battle of Britain Memorial Flight, for example, trains pilots on a De Havilland Chipmunk, a single-engined tailwheel aircraft. They’ll go from that to something like the twin-engined Douglas Dakota, a multi-engine tailwheel plane. From there, they move on to the multi-engined Lancaster.”

While Just Jane is not yet airborne, in the meantime, the museum runs earthbound trips around the airfield. “We do taxi rides on the Lancaster so people can get on board and have a ride with the engines running. We’re booked about a year in advance at the moment; it’s a very popular aircraft,” says Andrew.

All being well, Just Jane should be flying again very soon, at which point Pirtek pipes will take to the skies.

Any cookies that may not be particularly necessary for the website to function and is used specifically to collect user personal data via analytics, ads, other embedded contents are termed as non-necessary cookies. It is mandatory to procure user consent prior to running these cookies on your website.